Although the stock market once again ended the week in a “mixed” fashion, the Dow Jones Industrial Average continued its march higher by setting consecutive new all-time highs during the week.

In fact, the Dow has set new all-time highs during each of the last eight trading days while crossing another 1,000 point milestone at 22,000 to close the week at 22,092.81.  Bond prices also gained some ground to send Treasury yields marginally lower.

The financial markets continue to be buoyed by mostly favorable economic data.  This past week

Personal Income was reported unchanged at 0.0% for July versus a consensus forecast of a 0.3% increase, while Personal (consumer) Spending ticked higher by 0.1% in June after an upwardly revised 0.2% gain in May.

On the inflation front, the Core Personal Consumption Expenditures (PCE) Price Index, which excludes food and energy, increased by 0.1% in June to match expectations while the 12-month reading recorded a 1.5% increase.

Although the July ADP Employment data was weaker than expected with a reading of 178,000 new jobs created compared to 187,000 predicted by economists, the Employment Situation Summary (Jobs Report) for July was better than economic forecasts.

The Labor Department reported Non-farm Payrolls at 209,000, which was higher than the 181,000 expected.  The Unemployment Rate fell back to 4.3% from June’s reading of 4.4% to matching the reading for May, its lowest rate in 16 years.

Average Hourly Earnings rose 0.3% or by 9 cents to $26.36 to match the consensus forecast and is now up by 2.5% on the year.  Overall, both stock and bond participants liked what they saw in the jobs data with the strong job creation while wage inflation remained restrained.

The jobs data resulted in a slight increase in rate hike expectations for the Fed’s December FOMC meeting with the fed funds futures market now showing a 48.0% likelihood of a rate hike in December.  This is up from last Thursday’s closing reading of 46.8%.

In housing, the National Association of Realtors (NAR) reported their Pending Home Sales Index (PHSI) snapped a three month losing streak by posting a 1.5% gain in June to reach a reading of 110.2, up from May’s level of 108.6.

Lawrence Yun, chief NAR economist, remarked “The first half of 2017 ended with a nearly identical number of contract signings as one year ago, even as the economy added 2.2 million net new jobs.  “Market conditions in many areas continue to be fast-paced, with few properties to choose from, which are forcing buyers to act almost immediately on an available home that fits their criteria.

Low supply is an ongoing issue holding back activity. Housing inventory declined last month and is a staggering 7.1% lower than a year ago.  It appears the ongoing run-up in price growth in many areas and less homes for sale at bargain prices are forcing some investors to step away from the market.

Fewer investors paying in cash is good news as it could mean a little less competition for the homes first-time buyers can afford.” 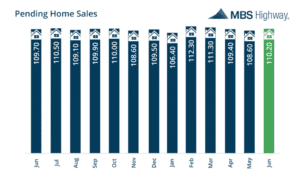 According to the MBA, the average contract interest rate for 30-year fixed-rate mortgages with a conforming loan balance were unchanged at 4.17% with points decreasing to 0.36 from 0.40.

For the week, the FNMA 3.5% coupon bond gained 25.0 basis points to close at $103.17.  The 10-year Treasury yield decreased 2.69 basis points to end at 2.2637%.  Stocks ended the week mixed with the NASDAQ Composite Index edging lower while the S&P 500 Index and Dow Jones Industrial Average moved higher.

Bond prices ended notably higher on Tuesday and Thursday before giving back some of the gains on Friday in reaction to the Jobs Report.  Still, the bond was able to break above a couple of resistance levels before falling back below resistance at the $103.20 level on Friday.  Friday’s reactionary trading resulted in a Hanging Man candlestick.

Therefore, confirmation of a trend reversal should be watched for.  Confirmation would be Monday’s candlestick closing below the real body of Friday’s Hanging Man candlestick.

Also, the bond is showing a sell signal from a negative stochastic crossover while extremely “overbought.”  This suggests the next move is lower toward support, and we could see a slight deterioration in mortgage rates this coming week. 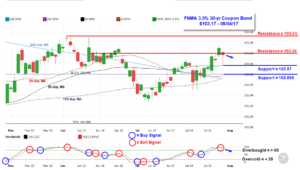 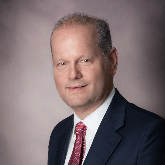